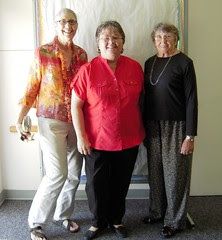 Following a packed budget meeting in the 5th Council district where residents came to listen about proposed cuts to the City budget and to discuss their concerns about the impact of the cuts,
Councilwoman Gerrie Schipske has compiled a listing of how a great deal of the these cuts can be restored by using the $17 million dollars that are excess from oil, refuse/street sweeping and state reimbursement for paramedic services.


"The residents have clearly spoken that they do not want police, fire, recreation and libraries cut while $17 million dollars sits as 'surplus'," says Schipske. "No one is proposing starting up new programs. What is being proposed is fixing those services and programs that make this city a safe, quality place in which to live and to work."

Schipske points out that the documents indicating the cuts fail to include what would be needed to keep yet another fire engine from being taken out of service.

"The entire focus in fire is about a pilot project that may not be approved by LA County Emergency Medical Services and repairing fire stations to make gender accommodations. The real issue should have been detailed for the City Council about how we are destroying the ability of our fire service to respond because we are browning out our stations and taking equipment and staff off service. How much would it cost to restore that? No body was given the figures. So I couldn't put it on my list, but will once we get the details."

Schipske says her proposals restore services instead of spending $7 million on a "down payment" on new software systems. "I also think that $1 million (instead of $4) this year is enough to start repairing the fire stations. As we get more funds then we can budget to complete the rest of the facilities."

"I also do not believe that the amount indicated as 'oil surplus' is accurate," says Schipske who has extensively researched the issue of the city's oil revenues. She points out that the FY 2013 budget lists an "oil surplus" of $10.8 million yet last year the city had a surplus of almost $18 million. "This year oil production was up and the price of crude oil fluctuated all year long between $80 and $125 a barrel. There should be a lot more money coming our way."

During her presentation at her budget meeting, Schipske described the cuts being proposed as "disproportionately impacting the east side of Long Beach."

"Recreational programming in every one of the parks in the 5th district is being eliminated. The only swimming pool on this side of town is being closed in the summer. We lost a fire engine from Station 18 last year and response times for emergency medical services is up due to reduced staffing. Our two library branches -- which serve the students of over 20 public and private schools in the 5th -- are being constantly cut back. Sidewalk repair funds are being cut -- and the 5th has the most sidewalks in the city. Park Ranger patrols are being reduced to only one park, and only 3 days a week and the 5th has the most parks. Crime is up here. We need more police. That is why it makes no sense to cut these services and use available funds for other projects. The economy is improving -- our sales tax revenue is up and so is property tax revenue. The price of crude oil remains high. We need to be cautious and I believe restoring these cuts as my residents and I have set out, does just that."

DISCUSSION: Following up with a community budget meeting in the 5th Council District and the input given by residents on line at: www.5thdistrictbudgetchoices.ideascale.com it is recommended that the “surplus” funds be distributed in the following manner:

These recommendations restore core services that provide public safety and quality of life for our residents.